we report a prospective study of the effects of extracorporeal shock-wave therapy in 195 patients with chronic calcifying tendinitis. In part A 80 patients with chronic symptoms were randomly assigned to a control and three subgroups which had different treatment by low-energy and high-energy shock waves. In part B 115 patients had either one or two high-energy sessions. We recorded subjective, functional and radiological findings at six months after treatment. The results showed energy-dependent success, with relief of pain ranging from 5% in our control group up to 58% after two high-energy sessions. The Constant scores and the radiological disintegration of calcification were also dose-dependent.Shockwave therapy should be considered for chronic pain due to calcific tendinitis which is resistant to conservative treatment.

Radiological evidence of soft-tissue calcification around the shoulder was first described by Painter in 1907, at which time the condition was thought to be the main cause of stiffness and pain. The incidence of calcification is uncertain. Bosworth found periarticular calcification in only 2.7% of 12 000 asymptomatic shoulders, but Refior, Krödel and Melzer described microscopic calcification in 22% of 195 rotator cuffs from cadavers. The usual site is in the tendon of supraspinatus, but other muscles of the rotator cuff may be involved. It is assumed to be due to local degenerative and proliferative changes in tendinous tissue.

The clinical symptoms vary considerably; many cases are self-limiting and resolve spontaneously while small deposits are often asymptomatic. Calcification of 1.5 cm or more usually causes complaints, and in chronic cases, periods free from pain may be interrupted by episodes of acute discomfort.   On occasion an  acute bursitis is  fol- lowed by spontaneous disappearance of pain and calcifica- tion, often with radiological disintegration of  the  lesion (Gärtner  types II and III; Table I). Despite this, chronic pain is not unusual and may require surgical treatment for restriction of shoulder mobility.
The effect of extracorporeal shock-wave therapy on cal- cific tendinitis has been the subject of several case reports, preliminary reports and controlled prospective stud- ies.  We aimed to verify its efficiency in the treatment of chronic and symptomatic calcified lesions in a large series, comparing different methods and modalities of application of the shock wave.

Principles of shock-wave therapy. The shock, or sound, waves used medically are single-impulse acoustic waves generated in water by an electrohydraulic, electromagnetic or piezoelectric source. They can act in liquid or in solid bodies. For shock-wave therapy the waves are focused by an acoustic lens or reflector system to a focal point inside the target tissue. Their physical characteristics are such that absorption in biological tissue is quite low and, after a few nanoseconds, pressure levels  of  more  than  10  MPa  are produced at the focal point.

The energy at the focal point is defined as the energy flux density (EFD) per impulse, recorded as joules per area (mJ/ mm2). The effective total energy of a treatment is defined by the number and EFD of the single impuses and by the geometrical measurement of the focus. For medical use, shock waves of approximately 0.001 to 0.4 mJ/mm2 are applied. It is useful to differentiate low-energy shock waves with a focal EFD of less than 0.1 mJ/mm2  from high-energy waves with an EFD of 0.2 to 0.4 mJ/mm2.

The shock waves used for lithotripsy can induce frag- mentation and destruction of solid bodies. High-energy waves have a physical impact on kidney stones, gallstones and bony tissue, but their side-effects include intramuscular haematomas and hypervascularisation with a local cellular proliferation in soft tissues. By contrast, the therapeutic effect of low-energy shock waves on painful entheso- pathies seems to be based on neurophysiological mech- anisms; physical and histological changes are rare.

We studied only patients who had had shoulder pain for at least 12 months, which had been resistant to regular physio- therapy and subacromial injections of steroid. All had an area of radiological calcification at least 1.5 cm in diameter, with signs of disintegration or resorption and were type I or II according to the classification of Gärtner. We excluded patients with degenerative changes in the glenohumeral or acromioclavicular joint, sonographic evidence of a rotator- cuff tear, acute subacromial bursitis, or any neurogenic disorder.

There were 195 patients (121 men and 74 women) with a mean age of 46 years (28 to 77). The mean duration of symptoms was 36 months, with the right shoulder most affected in 53%, although 28% had some complaints on both sides. All patients consented to enter the study after detailed explanation of the techniques, the possible risks of shock-wave treatment, and the alternative manage- ments. 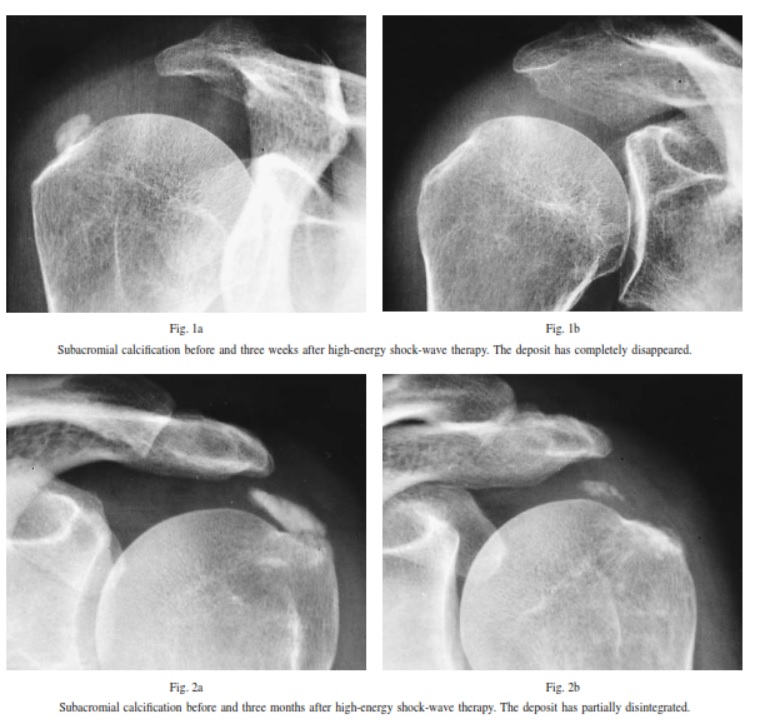 Part A of the study took place between July 1993 and December 1994. In order of their entry to the trial, 80 patients were divided into groups of 20. Group 0 had no treatment and groups 1, 2 and 3 had different regimes of shock waves. Group 1 had a single 2000-impulse session of  low-energy treatment (EFD  0.1 mJ/mm2),  group  2  a single  high-energy  session  (EFD  0.3 mJ/mm2)  of  2000 impulses and group 3 two sessions of high-energy treat- ment as for group 2 with an interval of one week. Patients in this part of the study were reviewed at three months to distinguish the effect of therapy from possible spontaneous resolution.

In part B, between January 1995 and December 1996, 115  patients  were  studied. They  were  divided  into  two subgroups. Group 2B consisted of 56 patients who were all treated like  those in  group 2  by  a  single 2000-impulse session of high-energy shock waves; group 3B, like group 3 above, had two sessions at an interval of one week. Patients were reviewed at three and six months to define the short- term effects and to record any later changes.

Assessment included the opinion of the patient, a review of radiological changes in the calcification and functional examination of the shoulder. Subjective success required freedom from pain or only slight discomfort after activity. Radiographs included an anteroposterior view in internal and external rotation and a supraspinatus outlet view. Effec- tive  treatment  was  recorded  when  the  calcification had completely disappeared or showed obvious resorption with inhomogeneity and reduction in size (Figs 1 and 2). Func- tion was evaluated by comparing the Constant and Murley score20  before and after treatment.

Statistical analysis of the outcome measures used the chi- squared, the Mann-Whitney U or the Wilcoxon signed-rank tests as appropriate.

Shock-wave treatment. Treatment in  part A  was given using an electrohydraulic lithotripter (MFL 5000; Philips, Hamburg, Germany). For part B of the study we used an electromagnetic lithotripter (Compact; Dornier MedTech, Wessling,  Germany). All  treatments  were  performed  as outpatient procedures, after subcutaneous infiltration of local anaesthetic (15 to 20 ml bupivacaine hydrochloride 0.5%). The calcification was visualised using fluoroscopy before and at intervals during treatment. This started with low shock-wave intensities which increased to the planned energy level within the first 300 impulses. Most patients found  the  treatment  unpleasant  and  sometimes  painful. Some small haematomas were seen after high-energy appli- cations, but no other complications were recorded.

There has been much controversy as regards invasive treat- ment for calcific tendinitis of the shoulder. Gschwend, Scherer and Löhr21 considered that only 10% of patients required surgical intervention, but Litchman et al,22 describ- ing 100 cases, stated that “hopeful waiting for spontaneous .

disappearance of the deposit frequently leads to persistent painful limitation of shoulder motion”. Conservative and operative treatments are often judged differently. Non-inva- sive measures frequently give relief of pain in the acute phase of the disease; needling of the deposits gives favour- able short-term results, but the good effects last only when the deposit has disintegrated.6 When spontaneous resolution and non-invasive treatment have failed, operation is most effective when the calcification is removed, but it may take months  of rehabilitation before the patient is free from pain. As yet there are no firm views as to the benefit of endoscopic operations,  but additional subacro- mial decompression does not seem to be indicated.

Graff   was  the  first to  analyse  the  effects  of  shock waves on muscles and tendons in dogs. After high-energy treatment he noted intra- and perimuscular haematomas and described the formation of metaplastic chondroid tissue. Rompe et al  exposed Achilles tendons of rabbits to shock waves: low-energy treatment (EFD 0.08 mJ/mm2) showed no histological changes, but 1000 impulses of high-energy therapy (EFD 0.28 mJ/mm2) caused transient swelling of the tendon with minor inflammatory reactions. Very high- energy applications (EFD 0.6 mJ/mm2) produced massive extravasation of erythrocytes as a result of capillary disrup- tion within 24 hours. In one clinical series, superficial haematomas developed in the soft tissues in 40% of 542 treated patients.  Systemic complications during treatment such as arterial hypertension and hyperventilation may rarely be seen.

The  mechanisms  of  the  therapeutic  effects  of  shock- wave therapy on shoulder calcification are not certain. The hypothesis is that increasing pressure within the therapeutic focus causes fragmentation and cavitation inside the amorphic calcifications, leading to disorganisation and dis- integration of the deposits. Disappearance of the deposits may be due either to breakthrough into the adjacent sub- acromial bursa or local resorptive reactions in the surround- ing soft tissues.

Our results tend to confirm previous reports. In part A of our study, we used a short follow-up of only three months, to define the direct effects of shock-wave therapy on the morphology  and  clinical  course  of  the  condition.  In  a longer follow-up there might have been confusion between the effects of treatment and spontaneous changes. In part B, the follow-up was for six months to observe any additional later effects. We  found no  significant changes in  radio- logical appearance after three months, but in patients with an initial improvement of symptoms, but no radiological changes, the pain often returned later. There were sig- nificant correlations between subjective and  radiological success in 77% of patients, and between success and the applied effective total  energy. There  was  no  correlation between the effectiveness of shock-wave therapy and the size of the calcifications.

We have confirmed the outcome of a prospective study by Rompe et al,10  in which 40 patients were treated with shock-wave therapy (1500 impulses; EFD 0.28 J/mm2) under brachial plexus anaesthesia. After 24 weeks, 67% had no pain or clear evidence of reduction of pain and 72% showed at least partial disintegration of the deposit, corre- sponding to pain relief.

Daecke et al also reported clinical improvement and significant correlation between the dose of energy and radiological effectiveness after one or two sessions of high- energy shock waves. A more recent study of 100 patients by Rompe et al compared low-energy (1500 impulses; EFD 0.06 mJ/mm2) with high-energy treatment (1500 impulses; EFD 0.28 mJ/mm2): at 24 weeks 52% of the first group had relief of pain compared with 68% after high- energy therapy, with radiological disintegration in 50% and 64% of the patients, respectively.

Of a total of 195 patients with chronic pain, approx- imately 58% gained effective relief from high-energy extracorporeal shock-wave therapy. We agree with previous authors  that high-energy shock-wave therapy should be considered before surgery for chronic calcific tendinitis in patients after a minimum of six months of non-invasive treatment, with deposits greater than 1.5 cm and no radio- logical evidence of spontaneous disintegration. We are now performing a long-term follow-up to exclude late complica- tions and record the recurrence of symptoms and calcification.

Although none of the authors have received or will receive benefits for personal or professional use from a commercial party related directly or indirectly to the subject of this article, benefits have been or will be received but are directed solely to a research fund, foundation, educational institution, or other non-profit institution with which one or more of the authors is associated.

5. Moseley HF. The natural history and clinical syndromes produced by calcified deposits in the rotator cuff. Surg Clin North Am 1963;43:
1489-93.