Despite the success in clinical application, the exact mechanism of shock wave therapy remains unknown. We hypothesized that shock wave therapy induces the ingrowth of neovascularization and improves blood supply to the tissues. The purpose of this study was to investigate the effect of shock wave therapy on neovascularization at the  tendon-bone junction. Fifty New  Zealand white rabbits with  body  weight ranging from 2.5 to 3.5 kg were used in  this study. The right limb (the study side) received shock  wave therapy to the Achilles tendon near the insertion to bone. The left limb (the control side) received no shock wave therapy. Biopsies of the tendon-bone junction were performed in 0, 1,4, 8 and 12 weeks. The number of neo-vessels was examined microscopically with heniatoxylin-eosin stain.  Neovascularization was  confirmed by the angiogenic markers including vessel endothelial growth factor (VEGF) and endothelial nitric oxide synthase (eNOS) expressions and endothelial cell proliferation determined by proliferating cell nuclear antigen (PCNA) expression examined microscopically with  immunohistochemical  stains. The results showed that shock wave therapy produced a  significantly higher number of  neo-vessels and angiogenesis-related markers including eNOS, VEGF and PCNA than the control without  shock wave treatment. The eNOS and VEGF began to rise in as early as one week and remained high for 8 weeks, then declined at 12 weeks; whereas the increases of PCNA and neo-vessels began at 4 weeks and persisted for 12 weeks. In conclusion, shock  wave therapy induces the ingrowth of neovascularization associated with early release of angiogenesis- related markers at the Achilles tendon-bone junction in rabbits. The neovascularization may play a  role to improve blood  supply and tissue regeneration at the tendon-bone junction.

animals and shock wave treatment
This  study was approved by the  Institutional Review Board, and was performed under the guidelines and  care of animals in research. Fifty New Zealand white rabbits with body weight ranging from 2.5 to 3.5 kg  were  used  in this  study. The right limb received shock wave therapy to the Achilles tendon near the insertion site to the heel bone, and was designated as the study side. The left limb received no shock wave therapy, and was designated as the control side. The rabbit was anesthetized with ketamine (50 mg/kg) and phe- nobarbital (30 mglkg) for the purpose of receiving shock wave appli- cation. The rabbit was placed in prone position with the right heel up. The shock wave tube was  focused on the Achilles tendon  near  the insertion  site to the heel bone, and the depth of the treatment was determined by the  control guide and confirmed  with C-arm image. Surgical lubricate was applied to the area of skin in contact with the shock wave tube. Each of the  study limb received 500 impulses of shock waves at 14 kV (equivalent to 0.12 mJ1mm') in 20 min to the right Achilles tendon near the insertion site. The shock wave dosage so selected was  based on the experience of our previous  animal  studies [40.41,44]. Immediately after  shock wave therapy, the right limb  was checked for swelling, edema, hemorrhage and motion of the limb. No special protection on  the right limb or restriction of activities was provided. The rabbit was returned to the housing cage and was cared for by a  veterinarian.

Histomorpholigical
assessment Biopsies of the Achilles tendon-bone   units were performed in 0, I, 4. 8 and 12 weeks with 10 rabbits at each time interval. The first biopsy was obtained in 24 h  after  shock wave therapy. The specimens were fixed in 4'%1 buffered paraformaldehyde for 48 h and decalcified in PBS- buffered I 0'%, EDTA. Decalcified specimens were longitudinally cut into 5-pm sections and  transferred to poly-lysine-coated  slides. The number of blood vessels including capillaries and inusculariml vessels were examined microscopically, and quantitatively assessed in six areas of tendon-bone  junction  from  three sections of the biopsy  specimens. A professional pathologist blinded to the treatment regimen performed the measurements on all sections under 40x magnification

Immunohistochemistry
For the purpose of confirming neovascularization.  the angiogenic markers including vessel endothelial growth factor (VEGF) and en- dothelial nitric oxide synthase (eNOS) were examined  microscopically with imniunohistochemistry  stains to reflect the  mediators  for neo- vascularization [5,35]. Detection of proliferating cell antigen (PCNA) was  chosen to reflect endothelial cell replication [ 191. Immuno-reac- tivity  in specimens was demonstrated using horseradish peroxidase (HRP)-3'-, 3'-diaminobenzidine (DAB) cell and tissue staining kil (R&D Systems. Inc.  Minneapolis. MN, USA) in accordance with manufacturer's   instructions.  After blocking endogenous peroxidase and non-specific binding, sections were incubated  overnight with the antibodies at 4 "C. Polyclonal antibodies used for  immunohisto- chemistry   were anti-eNOS, anti-VEGF  and anti-PCNA  (Upstate Biotechnology. Lake Placid, NY, USA). Sections were further incu- bated with  biotinylated anti-goat IgG and then  incubated with strep- tavidin conjugated to HRP. Immuno-reactivity was determined by incubating the sections in a  chromogen  solution containing DAB and 0.1% hydrogen peroxide in the dark, followed by counterstaining with hematoxylin. Dehydrate sections were mounted with mounting me- dium. Those without  primary  antibodies were enrolled as negative controls for the  immunostaining. Vessels showing positive VEGF ex- pression and cells displaying positive PCNA and  eNOS expressions were counted microscopically. The numbers with  positive  expression were quantitatively assessed, and the averages were calculated from six areas of tendon-bone   junction selected from  three  sections of each biopsy  specimen.

statistrical analysis
Data were  presented as mean k standard  error. The numbers of vessels and cells  dispbaying positive angiogenic markers at each  time interval between the study side and  the control side were compared statistically  using  Mann-Whitney   test  with  statistical significance at p < 0.05.

Increase of ungiogenic markers ujter shock wave therapy
The results of angiogenesis-related markers including eNOS, VEGF and PCNA are summarized in Table 2. In the study side, a significant  increase in eNOS, VEGF and PCNA was noted in as  early  as one week. The in- crease of eNOS and VEGF lasted for 8 weeks before they declined to  normal at 12  weeks, whereas  the in- crease of PCNA lasted until 12  weeks. In the  control side, however, no significant changes were noted in eNOS, VEGF and PCNA, and the differences between the  study and  control sides are statistically  significant. The microscopic features of eNOS, VEGF and PCNA expressions of the study and the control sides are shown in Fig. 2. The changes in eNOS, VEGF  and PCNA expressions at different time intervals are graphically illustrated in Fig. 3. The results  of this  study demon- strated that shock wave therapy induces  early  expres- sions of eNOS, VEGF and PCNA in one week, and subsequent  ingrowth of neo-vessels  in approximately 4 weeks. The increases of eNOS and VEGF were transient and only  lasted for 8 weeks; whereas the stimulation of cell proliferation and the ingrowth of new  vessels per- sisted for 12 weeks and longer. The biological  responses after shock wave therapy appear to be time-dependent. 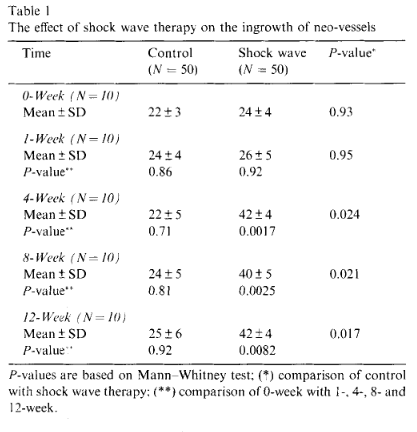 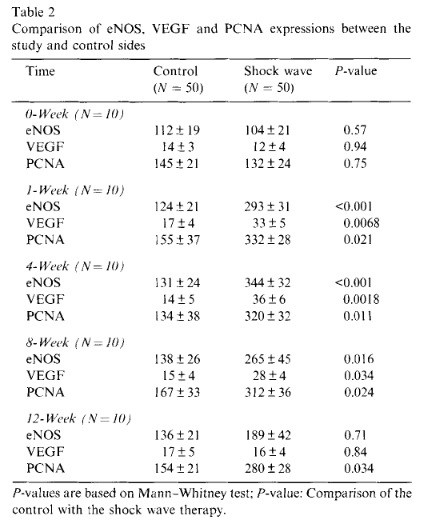 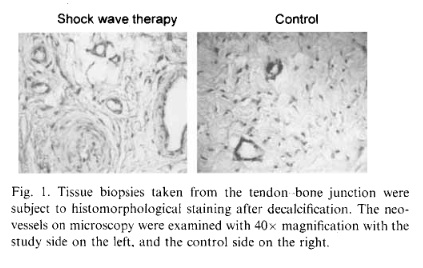 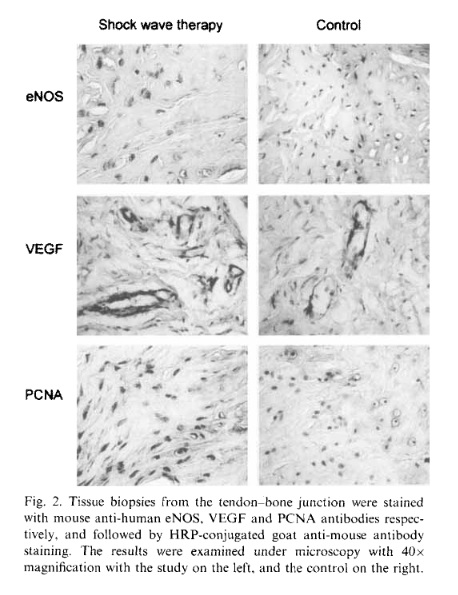 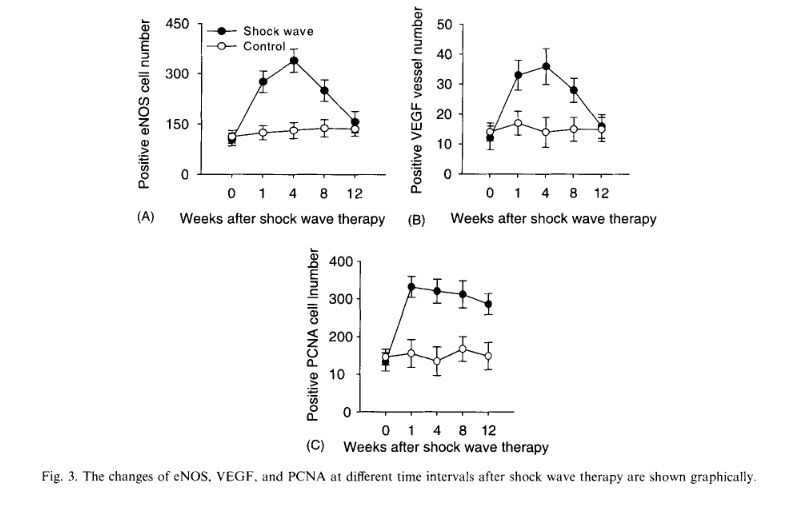 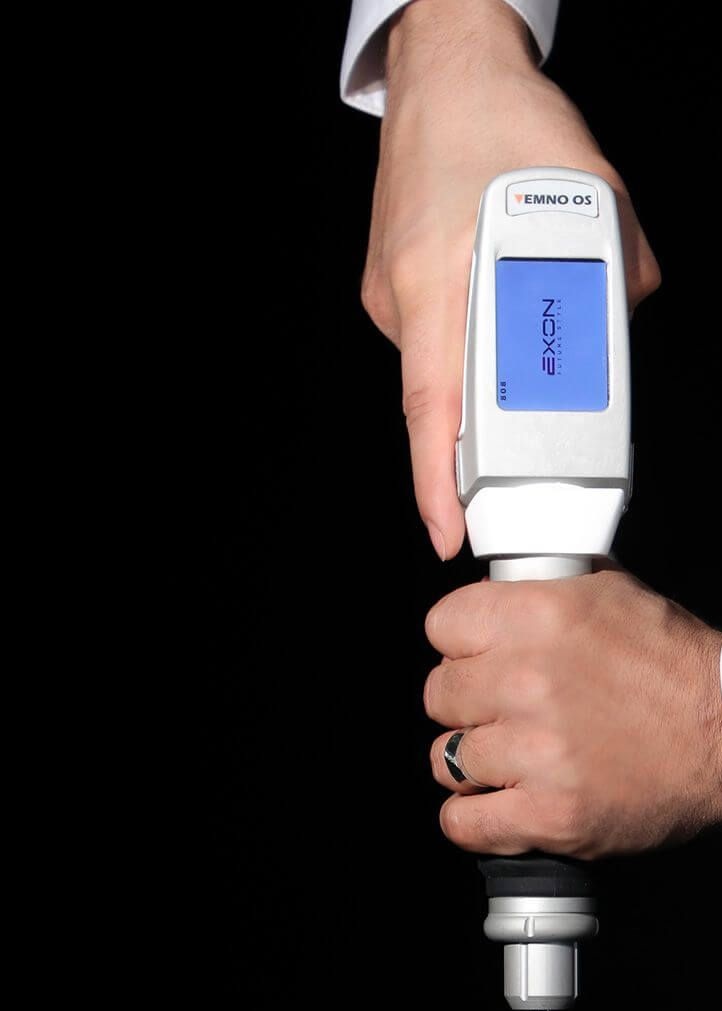