What are trigger points?

Trigger points are one of the most common pains in skeletal muscle and one the most mysterious causes of pain in various body parts. Their mystery is because of them remaining hidden from examiners’ view in most medical examinations so that the pain in patient would be attributed to such other factors as osteoarthritis disc, tendon strain and other diseases related to skeletal muscles. Another reason is that pain in trigger point will be transmitted to other body part which causes physicians to become misguided.

Scientific definition of trigger point is sensitive points available inside a taut band of muscle and the pain at the same point can be circulated among other body parts.

Muscles are string like tissues forming muscle volume; and, they become contracted or expanded all together. Sometimes due to high pressure or strain and severe contraction of muscles and sometimes due to long time fixed physical position these strings will stick together in wrong way and create painful nodes. This has to be taken into consideration that trigger points are not the same as muscle spasm. Spasm is muscular contraction engaging all muscles and occurring suddenly which is highly painful and will be ended after 72 hours. However, trigger points are available in just a part of muscle and can be irritating for a long time for patient. This dull pain is sometimes accompanied with smart pain and sometimes resembling neuralgia, the pain is going down through related part of body. Trigger point can create wide range of body pains. Shoulder pain, elbow pain, back ache, neck pain, sciatica, head ache, and pains released all around the face are from the most prevailed problems caused by trigger points available in patient’s body.

What are symptoms of trigger points?

Main symptom of trigger point is local muscle pain which can be transmitted to other points. The pain can be continuous or felt when muscle is moved. Sometimes there is smart pain in one point in size of a dime. Patient severely feels hot in one point of body and sometimes there is a shooting pain like neuralgia accompanied by numbness and downward paresthesias, transmitting to some point far from main location of occurrence. These points when touched have severe and unusual pain which sometimes will lead to shooting and numbness of body part. When touched with more pressure, these points will be fasciculated which specifically is considered as a symptom of trigger point. When touching pain area, some node-like points with pain are felt, moving under fingers like a small ball. Maybe the whole concerned muscle becomes rigid and this in some cases will lead to hard joint movement. This rigidity in joint and muscle movement causes disruption in movement of concerned body part. Pain resulted from trigger point is by itself another obstacle in terms of free movement of body parts. Involuntarily, moving that body part with trigger point in it would be limited by patient so that less pain would be felt. So, movement of that body part would become more limited due to rigidity and pain. 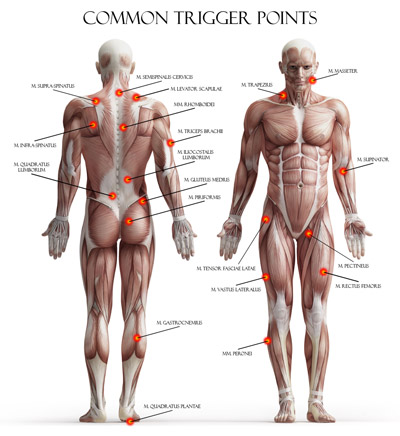 Since trigger point prevents normal body function and to escape from severity of pain, patient shows lower tendency towards moving the body part; gradually, that part becomes weak in muscles which will lead to other problems for person.

Change of movement pattern of body part brings about some changes in body status of patient like contracture and stiffness of joints’ movement; and, finally change of joint angles and derangement of natural direction of joints are from secondary consequences of trigger points.

In case trigger points are available around neck, head and face, patient would be suffering from migraine headache, pain behind the eyes, pains all around the face and tinnitus.

Trigger points available around shoulder will lead to pain in shoulder joint and pain and pins and needles in some parts of arm, elbow, and hand.

Trigger in cervical spine creates neck pain, shooting pain towards hands, smart pain in the back and around shoulder.

Trigger points in lumbar spine create sciatica along feet in addition to pain in the back.

Electrotherapy is one of proper methods of blocking pain pathway in patients, through which appropriate electric current would be selected for them based on location of trigger, area engaged and severity of pain. Electric current will block pain pathways in body and this stimulation prevents pain signal to be sent to brain. So, pain would be treated with no painkiller. One of these electrotherapy method is tecar technology.

Tecar therapy is a modern technology helping alleviation of chronic inflammations, skeletal muscle pains and etc. through sending radio frequency waves towards damaged tissues and stimulation of treatment processes in body. Somehow, it removes surgeons’ requirement for performance of surgeries. Tecar technology is used in physiotherapy centers to treat trigger points. Waves produced by technology will be implemented on those tissues with trigger points created in them through skin and via device applicator. Through increase made in blood and oxygen supply in these tissues, ground would be paved for elimination of pains released and freedom of trigger points. 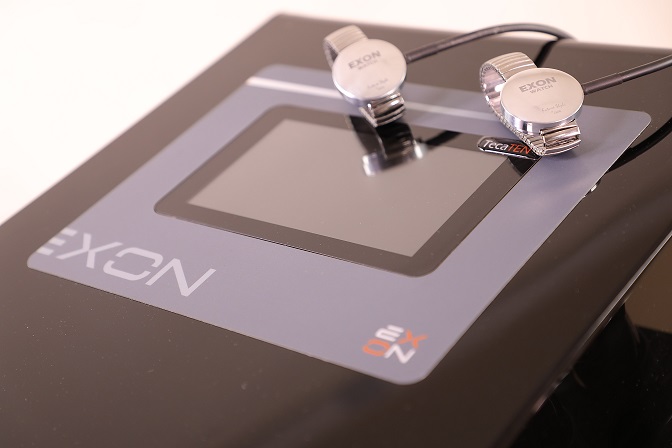